The most extreme point of Ortigia is headed by the Swabian Castle, better known as Castello Maniace. The name of the Syracusan fortress refers to the Arab commander Giorgio Maniace of 1038 AD who conquered the castle and made it its fortress. In testimony of his passage he left two bronze rams that were later placed right at the entrance of the Syracuse castle.

In a hypothetical complete tour of what to see in Syracuse the passage to the castle of maniace is mandatory. If you have followed our one day tour to the Aretusa fountain, of which we have also told the myth, it is inevitable to come across this immense structure of 51 meters per side with four cylindrical towers. The entrance has an ogival argon, typical of the Swabian era, with the two rams of Maniace at the sides of the shelves. Nowadays they are no longer in their guard post as one was destroyed and the other preserved in the archaeological museum in Palermo.

The castle of Syracuse was built at the behest of Frederick II who considered it the spearhead of the great network of Sicilian castles. Marieth, as they called him at that time, experienced many moments of glory. Here Federico signed for the construction of the University of Naples, in 1288 he hosted the Aragon family and saw Peter II of Aragon ascend to the throne.

Unfortunately for those who want to visit Syracuse today will not find itself in front of the enchanting castle that it had to be. The weather, the various dominations and especially the two earthquakes destroyed the original structure and was restructured as we see it today.

Unlike the manors of the surroundings, the castle of Maniace must have been the sign of the presence of the emperor and his power, which is why it has a much more residential structure than the others. It represents the boundary stone of Federico’s regnum, in naval connection with the Holy land and Jerusalem. 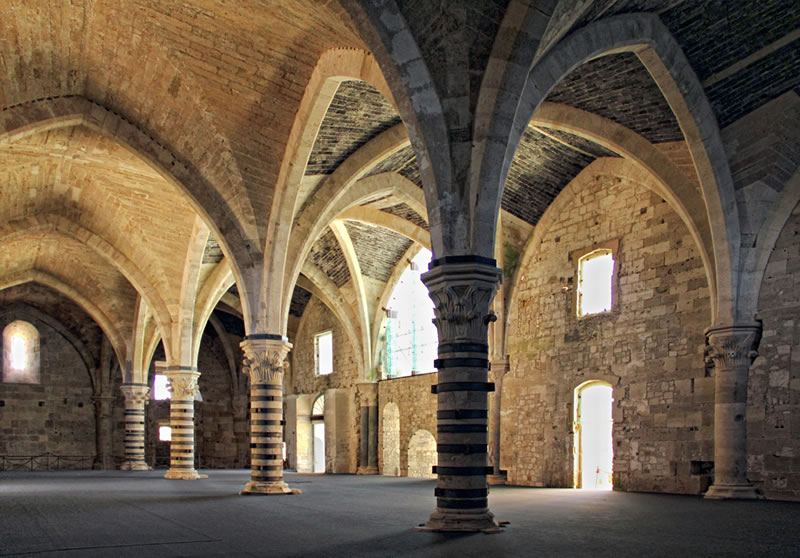 To access the maniace you pass by a stone bridge, the same one that the guests of the environmental G8 had to cross in April 2009 and the Ortigia Festival.

You can visit the rich rooms of the castle from Tuesday to Sunday in morning hours, from 9:00 to 13:00.

You can enter up to 30 minutes before closing to visit the Antiquarium opened in 2015 and many exhibition rooms with architectural finds found during the numerous excavations.

You can stroll along the large courtyard and rediscover the emotions that a great emperor could have inside his fortress.