WHAT TO SEE IN SYRACUSE

A day in Syracuse: guide to the itineraries that you absolutely must visit

Syracuse is undoubtedly one of the most loved cities by tourists in Eastern Sicily, will it be for the sea, excellent food or both? We plan to introduce you to Syracuse in all its aspects with different itineraries that weave history, art and tradition. Let’s start with what to see in Syracuse for those who do not have much time and do not want to miss the beauty of this city kissed by the sun and the sea.

When visiting Sicily it is easy to come across Greek and Roman remains of life, even the Normans passed through here leaving beautiful castles that coexist together with modern buildings. Thanks to its position, Syracuse has always been the center of trade in the Mediterranean, so much to excel in power and wealth with Athens. This city has also collected many great minds of antiquity, it is the homeland of the genius Archimedes and of Saint Lucia, even Plato did not remain indifferent to the beauty of Syracuse and tried for three times to establish his ideal state of the Republic.

With a history spanning thousands of years, there are many testimonies that we can still see and visit to feel part of the great classical history.

What to see in Syracuse in one day

The historic center is particular not only for the large number of historic buildings but more for its location. Ortigia is in fact an island connected by the two Umbertino and Santa Lucia bridges with the mainland. Most of it is closed to traffic, so tourists and students of architecture, based in Ortigia, turn to the island streets full of shops and restaurants that reproduce the typical Sicilian menus.

Ortigia Syracuse: the island inside the city 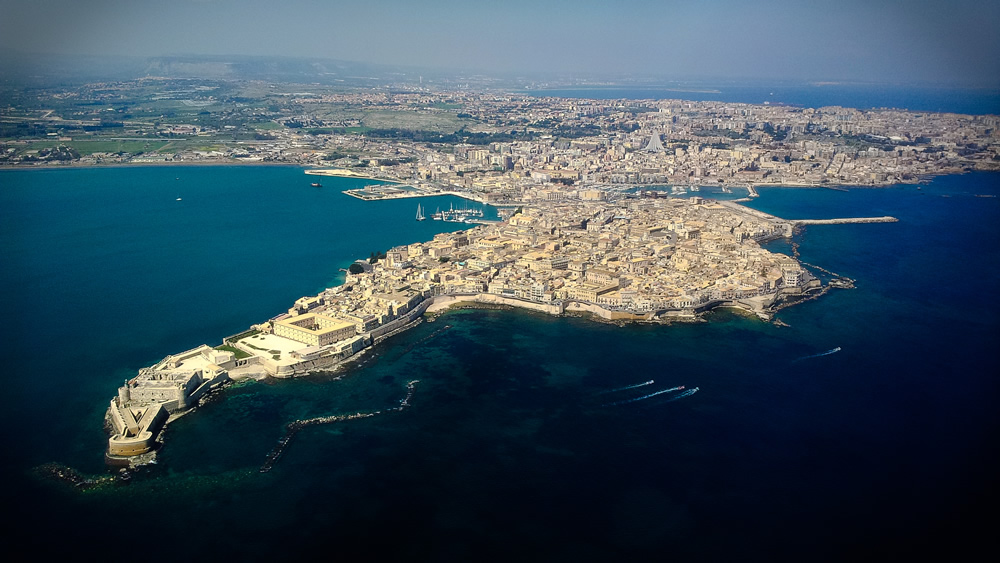 To welcome us we find one of the most beautiful fountains in the city, once we pass the bridges we immediately enter the heart of Ortigia with the Goddess Artemis at the center of the majestic fountain of Piazza Archimede. She is known to be the protector of the nymph Arethusa, we’ll talk about her later but I anticipate that thanks to her moving story she has become the symbol of the Syracusan city.

From this square we can finally start the itinerary biting into the narrow streets of Ortigia. If you hear about the music follow it, often in Piazza Duomo there are street artists who play traditional Sicilian music with bagpipes and marranzani to brighten the sunny days of tourists. 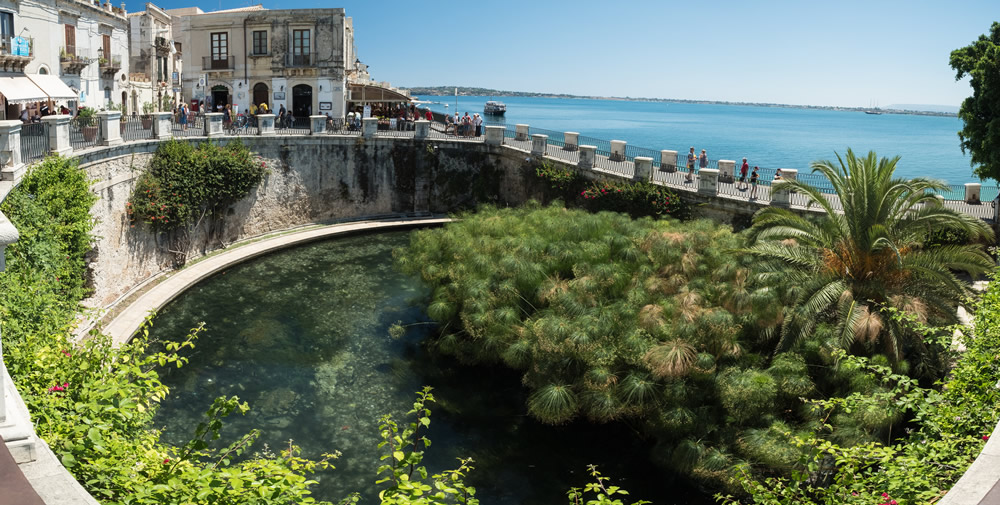 Continuing through the alleys to the right of Piazza Duomo you come to the Fonte Aretusa, next to the Syracuse aquarium. The statue in the center of the pond with nice ducks, now accustomed to human presence, depicts the beautiful nymph Arethusa, who was at the center of the haunting attentions of the god Alpheus, son of Oceanus. Artemis turned it into a source of fresh water to protect it, which flows into the sea below. The long canes in the circular font are papyrus stems, a peculiarity and rarity in Sicily. 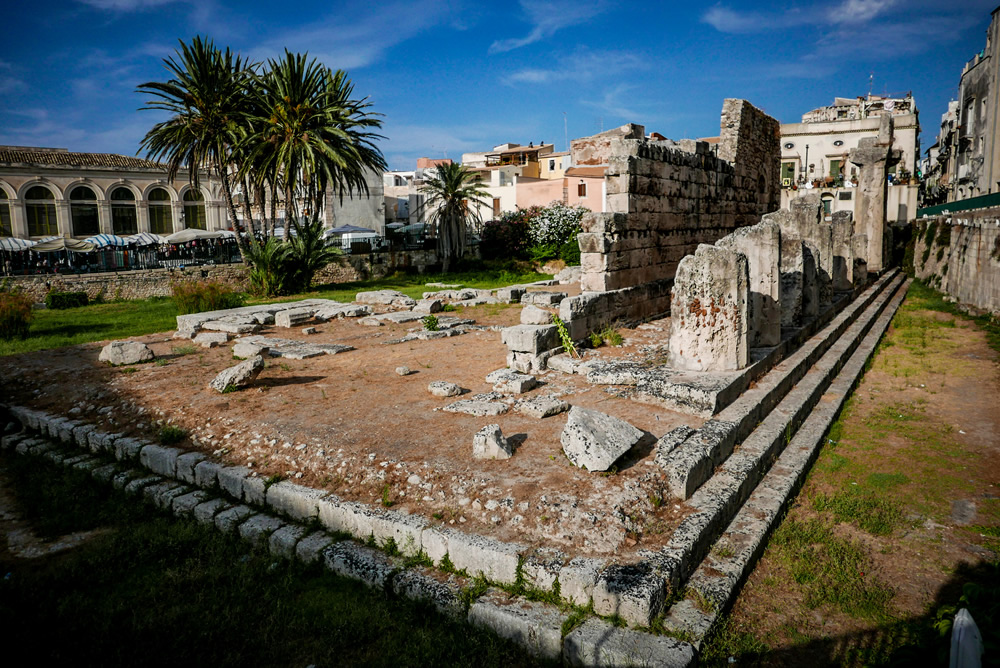 In the center of Ortigia it is impossible not to notice the remains of the temple of Apollo. It is the oldest Doric temple still visible in Sicily which was also a Byzantine church and then an Arab mosque. What remains after centuries of continuous transformations are the columnar bases and the design of the old structure. 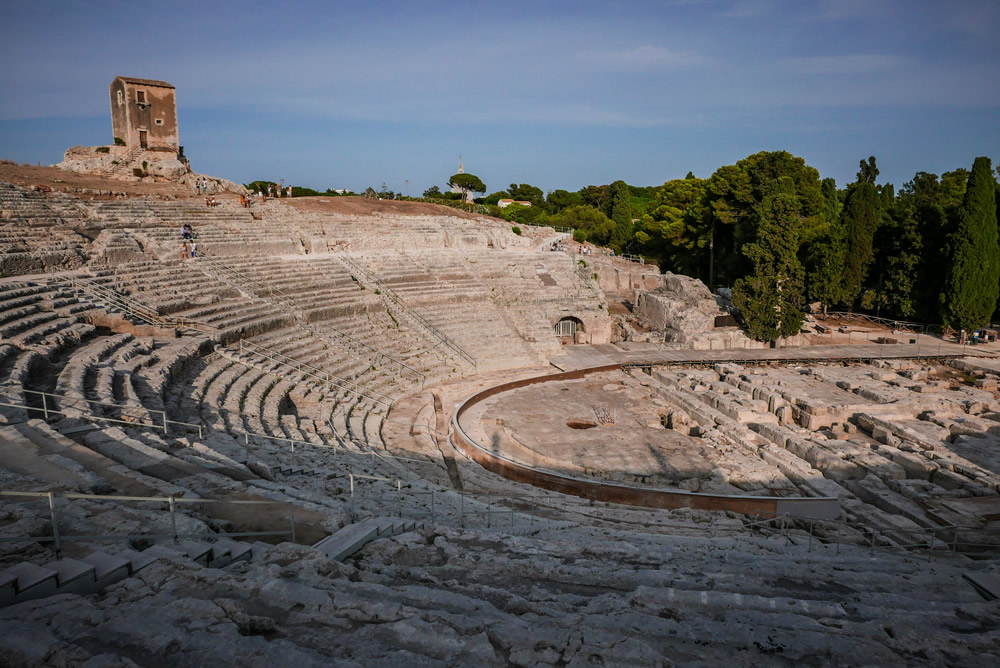 Outside the island of Ortigia there are other Syracusan wonders not to be missed, especially for those who cannot stay longer than a day. The Greek theater of Syracuse is much more than a simple building inside the Archaeological Park of Neapolis in Syracuse. It is still active and every year thousands of spectators can watch the Syracusan classical performances of Greek tragedies. It was built in the fifth century BC and still today it manages to fascinate anyone who has the good fortune of witnessing tragedies. The park is like an open-air museum where in addition to the Roman amphitheater you can see many latomies and the altar of Hieron II.

Ear of Dionysius: beware of what you say out loud 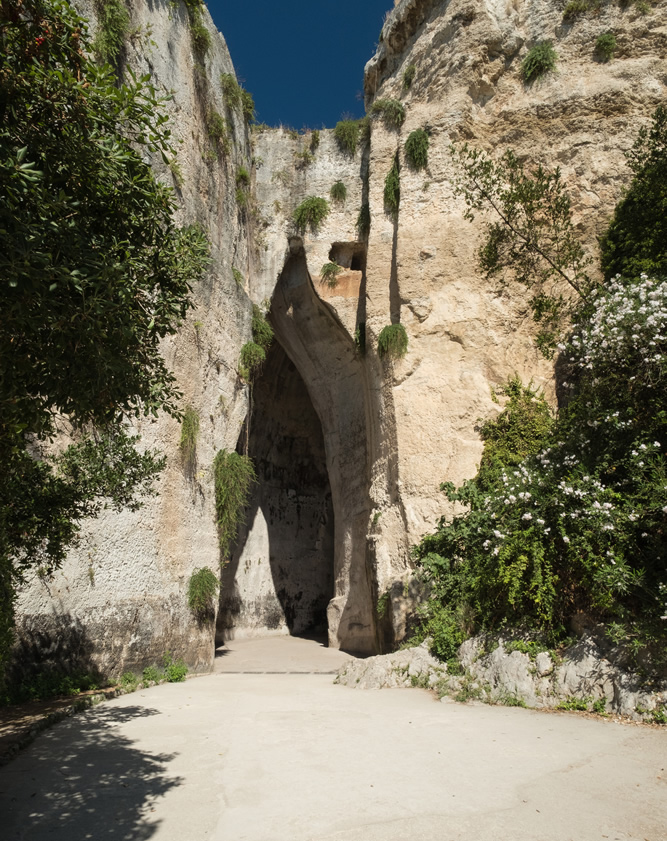 If one behaves badly one ends up in prison, and in antiquity they were carved into the rock. Here’s what Dionisio’s ear is, a latomia – or a stone quarry – which is located just below the Greek Theater. The mythology tells that it was Dionisio himself who created it to listen to the speeches of the imprisoned enemies. If we talk about it, the voice is amplified up to 16 times.

Walking through the streets of Syracuse is a unique experience, which can only enrich the wonderful journey to Sicily. In addition to these places there are other events and monuments not to be missed such as the Maniace castle built by Federico II, which can still be visited today as it hosts many cultural events, or the church of Santa Lucia. For this we will write other itineraries concerning the Syracuse area and its beautiful sea, with the white sand like the limestone typical of the area.